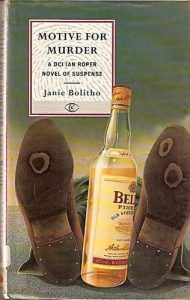 Motive For Murder is the second in the Ian Roper series published in 1994.

A Blurb from the Jacket of the book is contributed by a Library Assistant with the Cornwall Studies Department within the Cornwall England Library.

‘A sharp and startling green, like emeralds viewed through sea water, only the vagrant’s eyes are visible.

A brick lies near his head, several strands of long grey hair adhering to it. But the stab wounds to his abdomen are really the cause of death. DCI Ian Roper is mystified. The six pounds in the tramp’s pocket seem to rule out one motive; another down-and-out would surely have taken both the cash and the bottle of Bells which lies next to the body. But why bash his skull in when he was already dead? Heat of the moment? Drugs? Self-defense? Blackmail?

As the Rickman Green police HQ starts to hum with the nervous activity which heralds a major murder investigation, across town a young girl – a heroin addict – discharges herself secretly from the local hospital; a block of flats behind the Station Arms is burgled; an attempted suicide is foiled; and the devious machinations of a small-time pimp are exposed. All are linked to a complex and baffling homicide which threatens the social fabric of a small town and ends with a startling – and literary – revelation.’

Still working on this