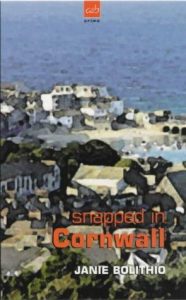 Snapped in Cornwall (The Cornish Mysteries)

The first book in the Rose Trevelyan series. The story begins with an introduction to the life of Photographer and Painter, Rose Trevelyan. She moved to the Cornwall area after college to pursue a career in painting, her first love, and meets and marries a gentleman named David. Sadly, her husband passes away after losing the battle with cancer. The story begins about 5 years later as Mrs. Trevelyan has established herself as the local photographer to make a living. She roams the Cornwall countryside capturing the local scenery in paintings that she sells to the local stationery store run by her friend Barry. She also takes commissions for photographing the locals for weddings, graduations, birthdays and the like.

Her first mystery is about a wealthy woman who has recently moved to Cornwall and renovated one of the local mansions. Her husband stays in London during the week for work and visits his wife on the weekend. Rose is commissioned by the woman to take photographs of her and her cat for Christmas cards. Liking Rose and feeling lonely the lady invites her to a party she is throwing as a sort of ice-breaker for her and the community. Of course, the lady is murdered and Rose finds her. The story unfolds as Rose gathers clues, talks to suspects and is harassed by the local detective. As with any good story you are never sure who the killer is until the very end!