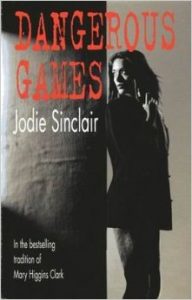 Dangerous Games was published in 1997 under the pen name of Jodie Sinclair. This work is rarely attributed to Bolitho because it seems to have been the only story published using that name. Of course, it is out-of-print and there are no plans to republish it, or have it published as a eBook as far as I know. Should that change we will post it here!

“There were five of them – Oxford’s brightest and best. Then they admitted Jenny to their circle, their games got out of hand and one of them ended up dead. But no one ever suspected them or that there had been a crime until the body turned up after six years, stripped of flesh and clues.

Then journalist Kathryn Brooks, in pursuit of a story, begins to dig around in Oxford. She unwittingly stirs up memories which a certain group of people would prefer to forget. And someone will stop at nothing to make sure Kathryn leaves the past undisturbed.”