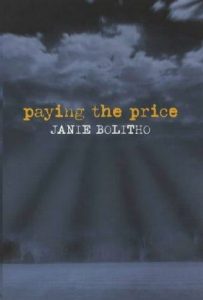 Paying the Price is another stand-alone book written by Janie Bolitho. It was released in July 24, 2003 after she passed away.

A deathbed confession leads a vengeful daughter to adopt a new name and identity in order to destroy one innocent family. Julie Bowden, the illegitimate daughter of John Pearson, learns of her father’s duplicity from her dying mother. It transpires that both women came second to John’s legitimate family, and this fact is something Julie can neither forgive nor forget. Adopting a new name – Lorna Daniels – she sets out to wreak havoc on John Pearce’s other family. Her first victim is the son, Robert, whom she seduces – only to dump on their wedding day. Having devastated him her attentions turn to Anna, his mother, targeting her with ever increasing acts of violence. As Julie slowly loses her grip on reality her crimes escalate out of control and very soon it becomes a race to find her and stop her – before murder becomes the final act in her personal vendetta.

We are still working on this